I've always loved redwork and am fascinated by Penny Square quilts.  I have always thought it would be fun to make one, but will I ever do such a time consuming thing? 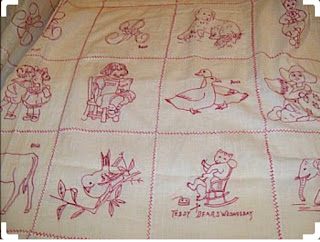 *** Do you ever wonder what you would be working on if there was no internet to keep you distracted?***

We have so much to see and learn and do these days.   I used to look forward to getting my monthly quilt magazines for ideas and inspiration.  I would sit for days and look through the pages, over and over again, trying to take in all the details and goodness in each copy.  Now we have so much to see,  I tend to click, click, click and over stimulate my mind,  forget what I saw, and have a difficult time finishing anything.

If I didn't have the internet,  I just might be working on a Penny Square quilt.  Or a state bird embroidered quilt. (I have a pattern)

But back to the Penny Square quilt....

Here is a history of penny squares that I found on the internet.

I can just imagine the excitement of going to the store each week to pick out the next square.  I would have begged to go with my Mama or Daddy so I could spend time with the penny squares.  I have loved having a needle and thread in my hand since I was a little girl. 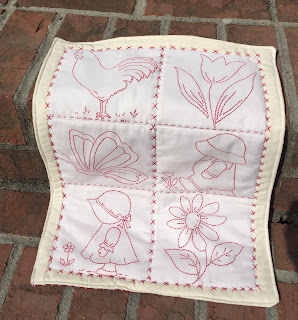 I  had ordered a 'cheater' cloth panel from ebay years ago.

When I was cleaning up my sewing room, I found the panel, which had each block 'set' in red strips.  I wanted my penny square quilt to look more like those  old ones I had seen on Pinterest. (internet...lol)  So, I cut all the squares out and decided to make a doll quilt for my granddaughters' doll play. 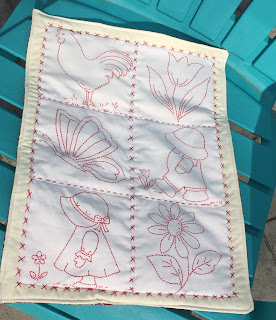 Nothing fancy and I didn't have to stitch the squares.  I sat down last night and added all the X's and ta-da ! I have my own mini version of a Penny Square quilt.  I have quite a few blocks left, so I may make something a little larger for myself.

Another fun and *mindless* project this week.

So what do you think you would be working on if you didn't have internet?  Would you still be using templates?  Would you be hand stitching?  I just wonder how it would be.... probably not as many quilters, for sure!
Posted by Little Penpen at 12:19 PM 14 comments:
Labels: penny squares, quilting, quilts, redwork

Is it really March?


Ok folks, time is flying by!! (it'll be Christmas before we know it)

February was a busy month for me.

Several of you have asked about Butterbean, as my last post was about him and his surgery.  He recovered extremely well from his surgery and acts like a young dog again.  I guess those large two tumors were affecting his activity level.  He has been kicking and playing and chasing his tail, and acting like a young boy again.

The  bad news is that he does have malignant cancer.  Both biopsies showed the cancer, which has pretty well been removed at this time.  We have elected not to do any type of further treatment, but will love him for as long as we can.


This little girl came to stay with Grandma and Papa for 9 days.  She was a pure pleasure to have around and is growing up so fast.  I realized two things about her while she was here;  1. She loves suckers (lollipops) and spent a LOT of  time trying to decide which flavor she could have the next time she was allowed one.  2.  She loves playing baby dolls as much as her Grandma did when she was a little girl.

I loved seeing that she included her doll in all day play.  Whatever we were doing, we had to consider the doll.... what she was wearing, if she needed to eat, if she could ride in the car, etc. 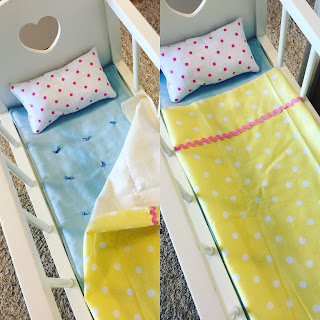 Since Brinley has gone back home, I have been going through my scrap flannel and making bedding accessories.  I have two cradles and I'm trying to get them both fixed up for when both granddaughters are here at the same time. 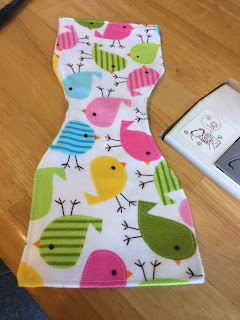 From there, I made mini burp pads for the dolls; then wash cloths and towels.  I need to pick up baby bottles, make cloth diapers, and anything else I can think of to get our granddaughter doll center into place. It has been fun and mindless sewing so far.

As if we need another sad dog story, here's another one about our black dachshund.  He woke me up at 3:00 Monday morning (snow on the ground) and needed to go outside, which is rare for him.  He was acting a little strange, pacing, scratching and just not being himself.  By last night, he was vomiting and very lethargic.

I took him to the vet this morning and he was diagnosed with liver and heart problems.  We came home with a bag of medication to see if we can get him better.  He is already feeling better by this afternoon, but I'm not sure how the long term will be for him.

I know my dogs are now known as 'old dogs' but it seems odd to me that so much is happening all at once with them.  (Sweet Pea, the other dachshund has a fast growing mass on her shoulder that we will have looked at next)  We moved here two years ago and the only thing that is different with them is our water supply.  We are now on municipal water, whereas we had used well water before.  Any thoughts?  The whole dog process is a first time thing for me.

I have been cleaning out and reorganizing my sewing room which has been a busy job.  I have rearranged the layout and I think I like it better.  I'm hoping the new arrangement will make me spend a little more time in there.  The weather is still cool here, but I just know Spring is right around the corner!!

Question:  I have noticed that a lot of bloggers no longer reply to their comments with an email.  This means we have to go back to their blog to see if they have any kind of reply for us.  I'm not really a fan of this way, but I'm wondering if there is a way to know they have responded without having to go back to the same post to find out.