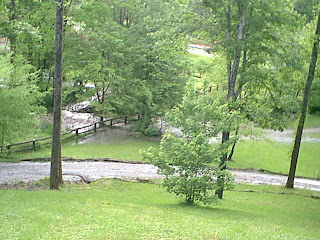 What a week! And it's already Sunday night... time to start another week. We had a very rough week at work this past week.... very emotional, very heartbreaking stuff! But we have to keep going! We had tornadoes in our area this week. We were able to practice our tornado drill at work, which included placing all residents in the halls with their doors closed. Most of them seemed to actually enjoy it.... a break from the monotony of nursing home life. There was a sense of excitement in the air throughout the whole ordeal. I read something today that spoke to me: When you get tired of suffering from trying to do your own will, maybe you should turn it over to God and seek His will. There is a lot going on in my world and I hope I can recognize God's will in all this! This picture was taken several years ago when we were living in Western NC. This was the view from my front porch after a big rain. If you look closely, you can see the little creek below was flooded. We have a creek running beside our house now, that also floods with heavy rains. With the bad weather we had on Wednesday, it flooded once again, but thankfully it has never risen as high as our house sits on the lot. God is good!
Posted by Little Penpen at 8:27 PM 6 comments: 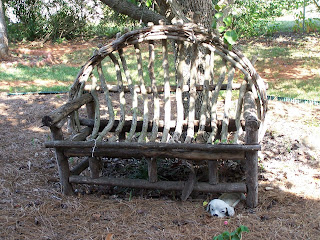 Who would think that a very tired willow bench could hold so many memories? When we moved to the mountains of Western NC eleven years ago, this was one of my first purchases made there. I bought it at a flea market from a little old man dressed in overalls, whose name turned out to be Mr. West. He told me how he climbed up the mountains in search for the perfect branches for his furniture, then cut the branches, brought them down from the mountain and into his truck, where they were transported to his workshop where he made beautiful pieces of furniture and flower baskets. He was a very small framed man who didn't look strong enough to do the work he did, but he was very good at it, and made lots of beautiful pieces and sold them at the flea market. Shortly thereafter, I met a little woman who resided at the local nursing home, where I worked. Her named was Mrs. West and she had Alzheimer's Disease. Sure enough, she turned out to be the wife of the little man who made my bench. He would visit her, still dressed in his overalls, which was his everyday attire. I tried to take good care of Mrs. West and frequently tried to comfort her while she was crying for her mama to come get her. She no longer recognized Mr. West and it was difficult for him to visit her. I used to imagine what Mr. and Mrs. West's life had been before she got sick, when they were both healthy and raising their own family. An acquaintance of mine started dating a new man and eventually married him. His name was Mr. West.... yep, the son of Mr. and Mrs. West. They built a beautiful log home across the road from Mr. West's home, which was a very humble little white house, nestled at the foot of the mountain, where he continued to make willow furniture. A few years later, a very special wildlife officer, who worked for my husband, was driving down the road and noticed a truck on the side of the road, piled high with branches in the truck bed. He knew Mr. West and recognized that Mr. West was out replenishing his supply used to make furniture. He then noticed a man in overalls lying on the ground near the truck. Yes, it was Mr. West. He was not breathing and his heart had stopped. The young officer called for help and performed CPR on Mr. West, who did not survive. Mr. West had died, doing what he loved..... making furniture. My willow bench has moved with me four times since I bought it and it now sits under a tree near my back door. It is for decoration only, as it never would sit comfortably, unless it had a nice cushion on it. I inspected it closely today to find that it has rotted over the years and can not endure another move from it's current location. I will let it sit where it is for now, but when we sell our home, the bench will no longer be a part of my life. I have several pictures of my bench, so the memories will always be there..... of Mr. West, his family, and of my special time while living in the mountains of Western NC.
Posted by Little Penpen at 4:57 PM 9 comments:
Newer Posts Older Posts Home
Subscribe to: Posts (Atom)