However, I have noticed when taking photographs in my livingroom, that my corners always look so bare.   So, I decided to do something about one of them. 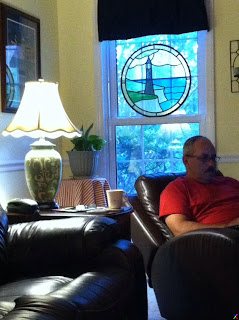 I added the plant and the picture that you see behing the lamp. (yes, lamp needs to go!)  The man in the recliner is the one who altered my new sewing table for me.  I'm still happy about that. 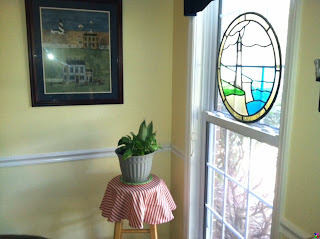 Here's the little 'table' from another angle.  It's actually an extra bar stool from the garage and I plan to paint it green.  I made the little round cloth today from thrift store fabric that  I hoarded  bought sometime back. 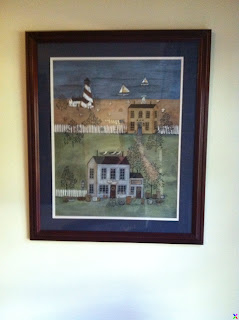 Sorry about the quality of the photo (using my iphone), but I wanted to show this pretty pic. that I bought this week from a new store in our town.  This picture is titled: The Basketmaker.  If you click to enlarge the pic, you can see the baskets.  I love everything about it.  Avery likes the sailboats. They are 'just like' the one he plays with in the bathtub.  ;))

I am learning so much about sewing and quilting online, thanks to so many great tutorials circulating out there.  I found one last night on Pinterest about machine sewing quilt binding...front and back.  Without pinning a thing.... did you hear me?? without pinning a thing!! 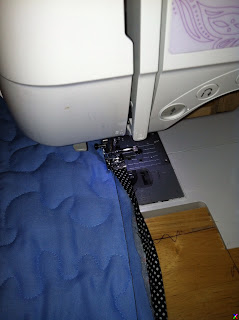 I tried it tonight on a full sized quilt and I had the whole thing sewn on in approximately one hour.  It turned out well, but I'm not ready to reveal the whole quilt to you just yet.
Click here for the link to the video.  (it is on pinterest, and I hope you can link to it) Missouri Star Quilt Company
Now to show you something else that I am so happy with: 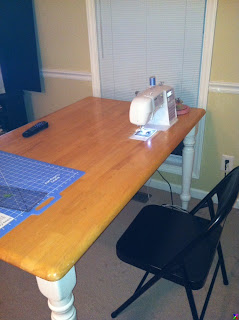 Meet my new sewing table!  I found the table on Craigslist for $50 and my husband measured and cut out a hole for the machine.  He built a little shelf underneath to hold the machine and I'm telling you, this set up is awesome.  No shoulder tension and the table holds the weight of the quilt!  LOVE!!
In a few more months, hubby retires from his job and we are getting rid of the two computers that I currently share my sewing room with.  (actually he shares his office with me!)  I can hardly wait to set up the whole room just for me and my sewing! 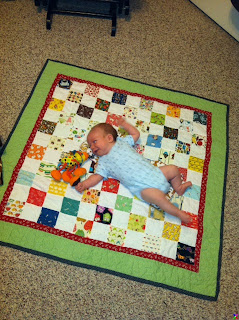 Here is a pic to show off little Chandler on the quilt that I made for him.  I watched him and big brother today while their mommy went for her 6 weeks check up.  Can you believe he is 6 weeks old??  He is giving Grandma some mighty sweet smiles these days! 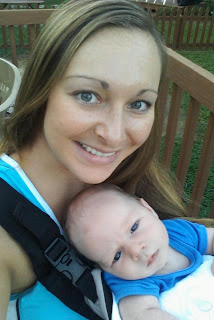 I leave you with a picture of Chandler and his pretty mommy.  I think Chandler looks so much like his big brother in this picture.  I'm so in love!﻿
﻿
﻿
Posted by Little Penpen at 10:23 PM 4 comments:
Labels: quilt, quilts 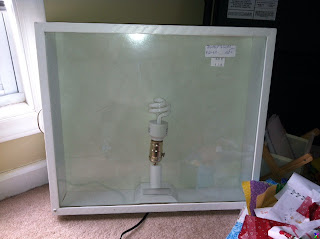 This is what I found at the thrift store this week.  $5.  I was excited to find it and grabbed it up and carried it around the store as soon as I saw it.

You see, I already own one of these, but it is much smaller, and was much more than $5. 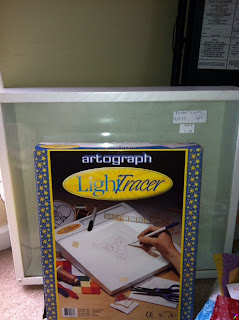 For those who don't know, this is a light box.  It is a very handy tool for tracing embroidery patterns.  (I used to use my storm door and sunlight to trace patterns, which works very well, too)  My husband bought the one in the little box for me several years ago and I have put it to good use.  However, because of its smaller size,  I sometimes have to trace a little portion, then slide the fabric around, and then trace some more.   So, you can imagine how excited I was to find this large light box for $5.

I took it to the cashier to pay for it and the manager of the thrift store was standing there as I checked out.  When she saw that I was buying the box, she smiled and  said "what are you going to do with that thing?"  I proceeded to explain to her about the light box and to tell her how happy I was to find it. She admitted that she had NO IDEA what that 'thing' was and had no idea how to price it when it came in. She was happy that I was happy!  I, personally, think I got a great deal on a very nice light box and the manager got a nice learning lesson, so that she can raise the price on the next one that comes in.  SCORE!  :))
Posted by Little Penpen at 2:52 PM 6 comments:

Happy Sunday to You!

I hope everyone is having a great Sunday and has plans for a fun week ahead.  Reflections from my past week:

﻿﻿﻿
I have a friend from way back, that I reconnected with on Facebook.  (see, FB isn't all bad....just mostly bad! LOL) The quilting bug recently bit her and  back in January, she and I decided to swap a 9 patch block each month, just to keep us motivated....
﻿
Well, I finally have enough blocks to put my quilt together and started on that this past week.  It's been fun!

** I wanted to show you pic's of my grandsons this week, but the pic's are loading sideways.  Any advice??**   (they load sideways, I rotate them with "Paint", save them....and then they show up sideways again when I try to blog them?????)

** After doing some google research, I found out it has to do with pic's taken with my iphone.  So, gotta take more camera pic's*** 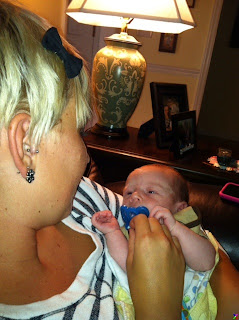 (Yay!  Loooooooook!  I got the problem fixed.  I downloaded an app. to my phone that takes the Exif encoding out of the picture, which was causing the sideways problem. whew! )

So, back to my week:  We spent time with this little guy, who is now three weeks old.... he's just precious! 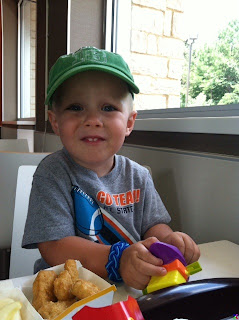 And this big guy stayed two nights with Grandma this past week....what fun!  This pic was taken while we had lunch at McDonald's.  He took most of his lunch home with him, because he was too busy watching the other kids in the playplace and he was ready to get inside and play, himself!  He picked out the blue bracelet while we were out shopping....doesn't he look like a big kid?  He's only 2! I love him!!
Posted by Little Penpen at 10:31 AM 7 comments:

Isn't blogging fun?  And it's even better when we meet new friends who truly become a part of our everyday lives!  My sweet friend Debbie J. from Homemaking Dreams  became my friend early on in my blogging life.

Debbie sent a sweet package to me this week.  She is an avid quilter and made the cutest little mug rug and quilted changing pads for my new grandson, Chandler. 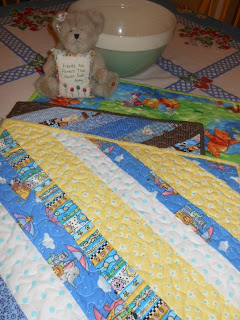 Aren't these the sweetest little pads? I love the pretty fabrics she used!  She also sent big brother a little gift...something all boys enjoy:  dinosaurs!  He is going to love those!  Thank you, Debbie, for being so thoughtful. 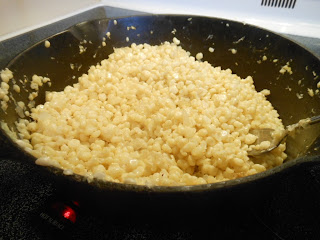 We didn't grow corn in our little garden this year, but received 12 ears from hubby's coworker on Monday.  I cut it off the cob, cooked in a little bacon grease with a small amount of onion, and froze it.  I plan to finish it up next week, on Tuesday, which is our traditional family night with the children.  I am going to add a little cream, a little sugar, and salt and pepper.  It will be my first attempt at making creamed style corn and I hope it will be as yummy as I imagine it will be. 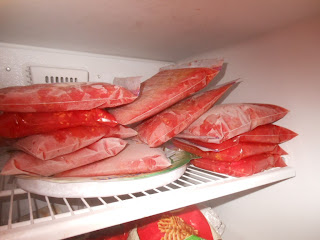 I've heard a lot of people say that they haven't had too much luck with their tomatoes this year.  We only planted four plants, but ours have been some of the prettiest tomatoes we have ever grown.  I've also received tomatoes from others and have managed to freeze a few quarts for later.  I enjoy the freezing process and can just imagine how yummy these home grown tomatoes will be in chili, soup, and spaghetti sauce when the weather turns cool.  I'm not rushing it, but I am looking forward to cooler weather!
Posted by Little Penpen at 10:27 AM 8 comments:
Newer Posts Older Posts Home
Subscribe to: Posts (Atom)