It's been a busy week, but I did manage to get some sewing time in today. 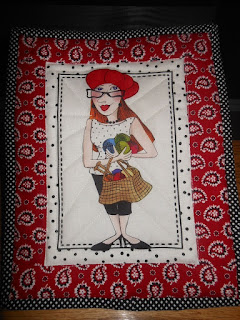 I made this little mug rug/ mini quilt for a friend from church.  This sassy knitting lady is part of a panel by Loralie.  I have more sewing ladies that I plan to make a wall hanging with someday.  Loralie also has a nurse panel that I really need to purchase.  I can think of some fun gifts for some of my nurse friends. 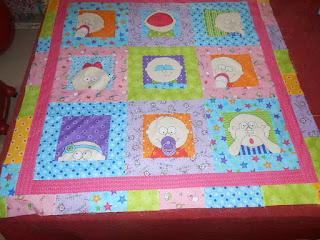 I finished the quilt top made from an Amy Bradley quilt panel that I purchased years ago.  These little faces make me smile every time I look at them.  I let Avery see this quilt yesterday and he decided the babies were all boys, even the one with the pink hair bow.... 'somebody put a hair bow on that boy's head.' 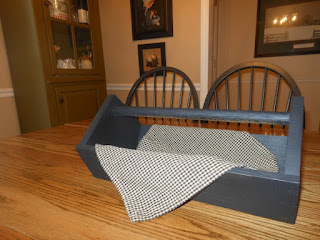 I spray painted this week, too.  I bought this wooden toolbox at Goodwill for 2.99.   It was flat brown and I painted it black. Now, what to put inside of it???  My brain is thinking embroidered mini pillows  and mini quilt block pillows.  Or fake fruit??  Ideas?? 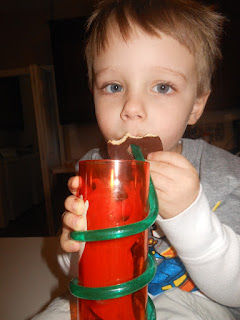 I watched the boys for a couple hours yesterday while their mommy worked on the zip line.  This was Avery's new trick....he decided  the cookie was his new mouth.  We spent quite some time yesterday, renaming our body parts.... our noses were rocks, our eyes were marbles, our ears were flowers, our hair was spaghetti, our feet were bricks, our arms were sticks, etc. etc. 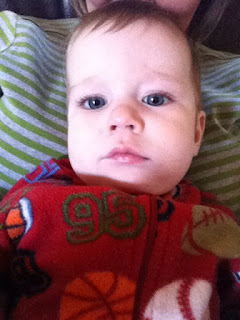 This  little fellow is seven months old already!  This picture was taken just before he fell asleep in Grandma's lap.  Chandler truly lights up a room with his smiles and sweet nature! 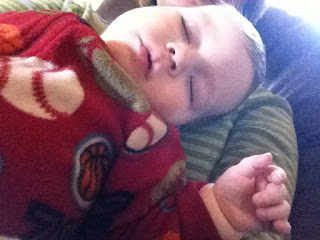 Here he is just a few minutes later.... one precious baby!

Thank you for the kind words when I mentioned I had not been feeling well in January.  I had a little scare with my labwork and was worried about what elevated liver enzymes might mean for me.  (being a nurse, I always think the worse...over the past 29 years I have taken care of plenty of hepatitis and HIV patients, not to mention accidental needle sticks along the way)  However, I went back for repeat labs this week and all were normal.  I am feeling much better and hope whatever it was, is all behind me now.  Thanks again for your kindness. Bloggy friends are great!!
Posted by Little Penpen at 10:09 PM 8 comments:

I don't know where January went, but here we are ... Feb. 8, 2013.  I was sick most of January, saw several doctors, had a wacky test result or two, medication changes, and am finally feeling better.  I hope this isn't how 'the rest of my life' will feel... hoping it's just the big  M (enopause).  But enough of that.... 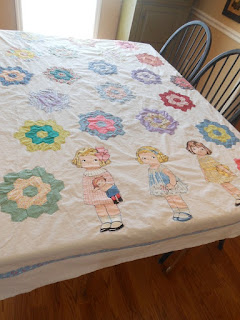 I finally got all the flowers sewn on this top and added a little blue border, and I"m calling this quilt top finished!  I hope the quilting will bring it to life, as it still looks kind of drab to me. 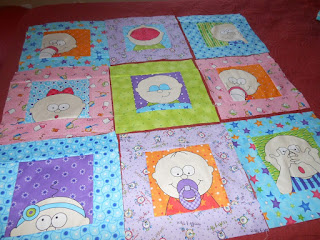 I bought this quilt kit several years ago while on a beach trip.  I swore it would be my first grandchild's baby quilt.  I have two grandchildren already and I"m just now getting around to putting this one together.  This one looks kind of 'girlie' to me, so maybe that's a sign.  I'll just put it away and wait patiently. 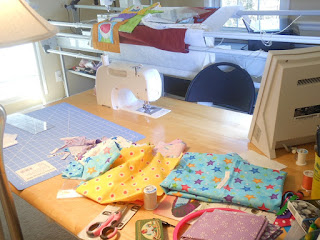 And this is my sewing room today.. a huge mess.  (I didn't even show you the floor... the worst part.) Can you see what's in the background, crowding up my tiny room?  Yes, hubby and I purchased a used Grace quilting frame and a Pfaff mid arm quilter just before Christmas.  I convinced him it would fit in this room.....and technically, it does fit... but there is no room to use it.  So, hopefully, this monster will be moved to my garage soon, before I start having a serious case of buyer's remorse.  :(( 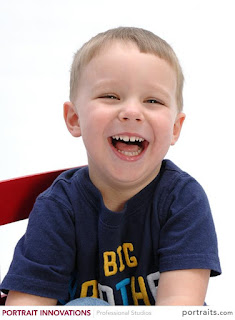 This big guy is going to be THREE years old tomorrow.  We are celebrating his birthday tonight at his house.  I called him on the telephone this morning to see if he was excited about his party.  He seems to be pretty excited and I am sure we will have fun tonight. 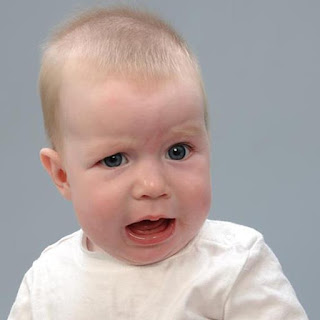 And this picture is just too funny not to share.  The boys' mom and I took the boys to have their pictures made just before Christmas.  By the time the photographer got to us, this little guy was tired.  He is usually such a happy and smiley baby, but he wasn't too interested that day.  (five months old here) 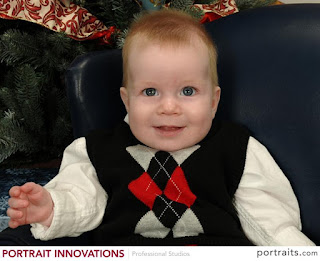 This one was taken the same day and this was probably the biggest smile we got during the session.  He is such a precious little one and is quickly catching up with his big brother in size.

Off topic:  What do you do with extra milk in the house?

We ended up with an extra gallon of milk in our house this week and I have been determined to use it before it spoils.  Neither of us drink much milk, so it has been fun to think of ways to use it. 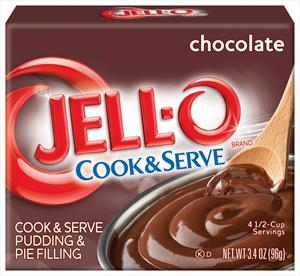 Wednesday night, I made cook and serve chocolate pudding for us to eat while watching tv.  I like the warm pudding so much better than the instant cold pudding.   I don't think I've ever made pudding for just the two of us before and we had plenty for each of us.... almost too much to eat at one time.  (when the kids were here, there was never enough and everyone would be licking their bowls for that last little taste)

Today I made potato soup.  This is one of the easiest things in the world to make and I love it!

And I have a 'no bake' cherry cheesecake in the refrigerator for later.  And I still have a half gallon of milk left!!  Maybe just a good ole mug of hot chocolate this weekend??? Or maybe I'll finish off the cereal.....
Posted by Little Penpen at 2:02 PM 13 comments:
Newer Posts Older Posts Home
Subscribe to: Posts (Atom)